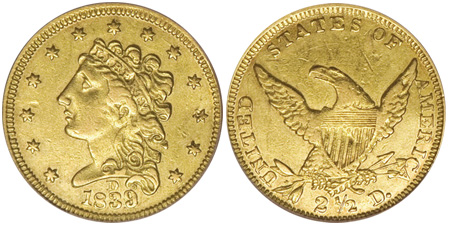 With the second lowest mintage of the series, the 1839-D Quarter Eagle (Buy on eBay) can be a difficult coin to locate. It is generally considered to be the most difficult coin of the three 1839 branch mint issues. As the first quarter eagle from the Dahlonega Mint, the issue garners increased demand.

The Dahlonega Mint produced a mintage of only 13,674 quarter eagles for this year, and it appears that the majority of these circulated extensively. It is estimated that 200 examples have survived in all grades with fewer than a dozen mint state pieces.

Composition and Specifications
Scroll to Top